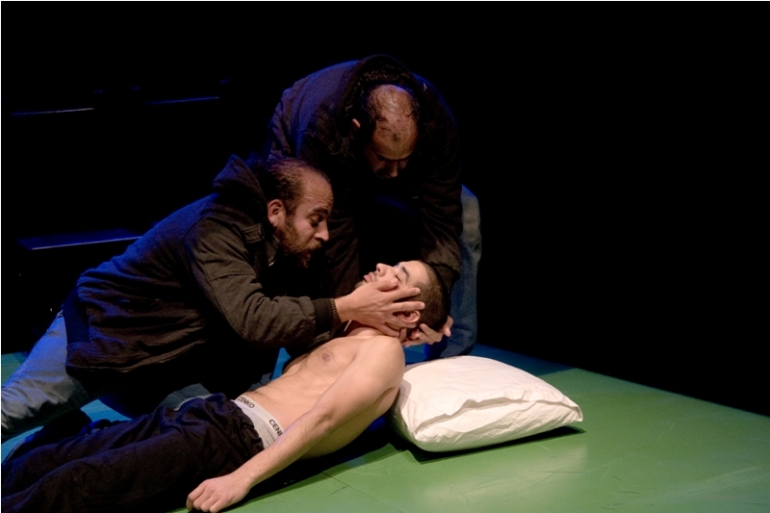 The story of Al-Gillalee:  A young Moroccan immigrant who lives illegally in Brussels.

The day Gillo was deported back to his country.  Gillo who is fearful from the plane enters into a new path within the memory of the moment of his birth until the moment of his deportation. Between the two moments, Gillo meets himself and several characters that accompanied him in his life, he goes with them through a final journey towards the moment of truth.

“Gillo…. is an easy name to pronounce, it is graceful and flexible.  It neither means anything nor implies to anything.  With this name you can open an easygoing and democratic conversation with the world.  When I am asked about the origin of this name, I fabricate an appropriate nationality based on the origin and background of the person asking.  Sometimes I am an Italian of an Italian father and grandfather: Ciao Gillo…. Another time I am of Greek origin from a Lebanese mother….Sometimes Spanish from Moroccan origin:  Olla Gillo…sometimes a Moroccan from Spanish or Andalusia origin.  This is a story I rarely use but it seems the most convincing.  What disturbs me most is to be forced to give my real name: Al-Gillalee,  a name starting with Al “the” , it is an Arabic name without a doubt, a name that incorporates an identity with all its difficulties.”

In the last night we meet Gillo the laugher, the lover and the fearful in an exciting theatrical evening.

Coordinator for the website of the Arab Dramaturgy Project:

This publication has been produced with the financial assistance of the European Union under the ENPI CBC Mediterranean Sea Basin Programme.

The contents of this document are the sole responsibility of Al Harah Theater and can under no circumstance be regarded as reflecting the position of the European Union or of the Programme's management structures.