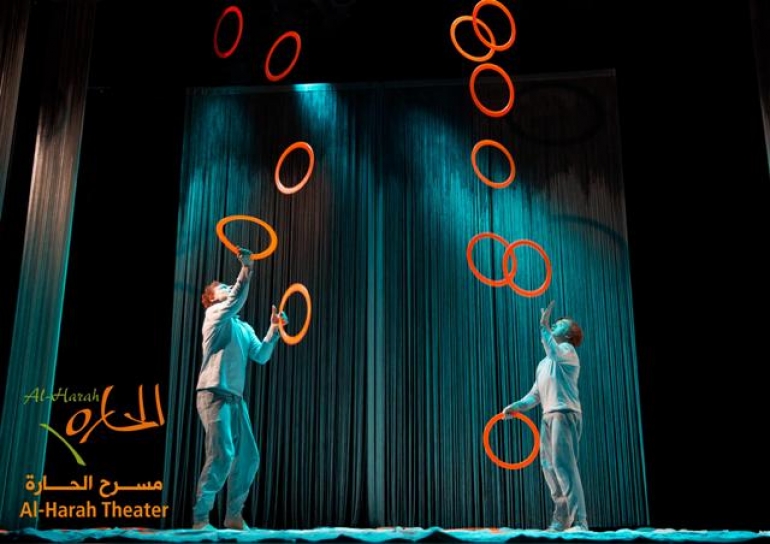 Al-Harah Theater is hosting "The Moon Illusion" show for Rapid Eye Contemporary Circus from Denmark within The International Children and Youth Theater Festival "Yalla Yalla" 2017, on Saturday 8/4/2017 at 6:30 pm at Dar Annadwa - Bethlehem.

In “The Moon Illusion”, Rapid Eye unfolds a fantastical universe of visual, musical magic and catching playfulness.The jugglers Samuel Gustavsson and Petter Wadsten, two of Scandinavia’s most significant modern circus artists, play teasingly with the idea of optical illusions. They are supported by exceptional electronica-musician Bjørn Svin’s seducing, extraordinary beats. When Gustavsson and Wadsten with playful ease perform their acrobatic tricks, a subtle and humorous poetry emerges – it seems as if they were born to be on that stage together.

Rapid Eye was founded in 2010 by artist Samuel Gustavsson, and has since then managed to establish itself with a unique profile in contemporary performing arts. The company creates performances in the borderland between modern circus, dance and visual theater. The performances are characterized by a love for human beings and their wondering at the world, and they explore the perception of reality in a playful way. Gustavsson questions the big and small things in life. The relation between you, me, life, and the universe are put under the microscope. Humorous poetry, philosophical magic, artistic precision and timing, as well as charming personalities on stage constitute the fascinating uniqueness and quality of Rapid Eye’s performances.