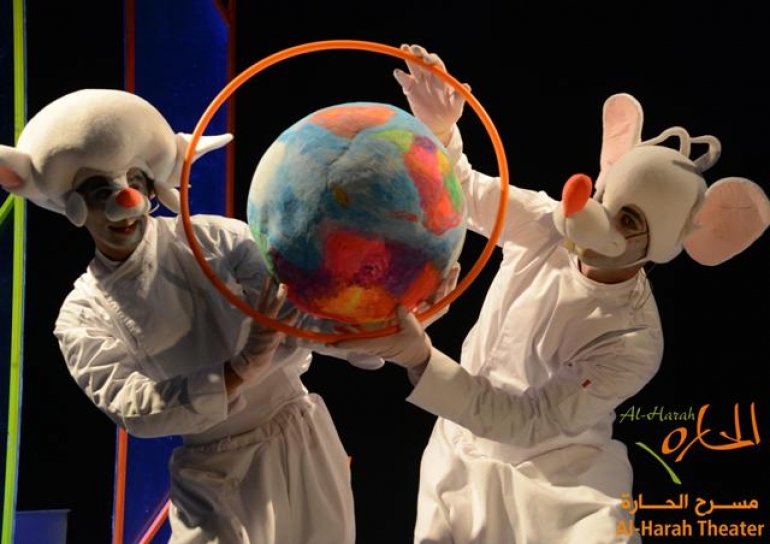 Al-Harah Theater is hosting "Pinky & Brain" play for Nazareth Ensemble Fringe from Palestine within The International Children and Youth Theater Festival "Yalla Yalla" 2017, on Sunday 9/4/2017 at 6:30 pm at The Russian Center - Bethlehem.

The show is suitable for children between 8-12 years.

We noticed at the Fringe Theater that the number of people getting sick because of the exposure to different kinds of germs and bacteria is increasing. One reason for this is the bad treatment of the environment. That is why we decided to produce a children performance that talks about the importance of keeping a healthy environment and what is their responsibility towards it. The play talks about two mice, “Brain” the clever mouse who is trying to invent a machine that affects the children’s behavior so they throw the garbage everywhere, this makes an increase in the number of mice and they control the world and he becomes the Master of the world. “Pinky” is the kind hearted mouse who cares only about playing and enjoying life. Will Brain’s plans succeed in controlling the world? What will happen to them?

Established in 2007 with the support of the municipality of Nazareth which hosted the company at Mahmoud Darwish Cultural Center. Since its establishment, the company won the acceptance and the respect of the community because of its respected and professional artistic work.

The company produces theater performances for all age groups in a very high artistic quality based on local and international scripts, in collaboration with the Arab artists from different artistic specialties. They produced 25 different theater shows. The company proudly reaches Palestinian Audiences where ever they are.

The Fringe Theater is one of the pioneer theater companies in the occupied Palestinian areas in 1948.