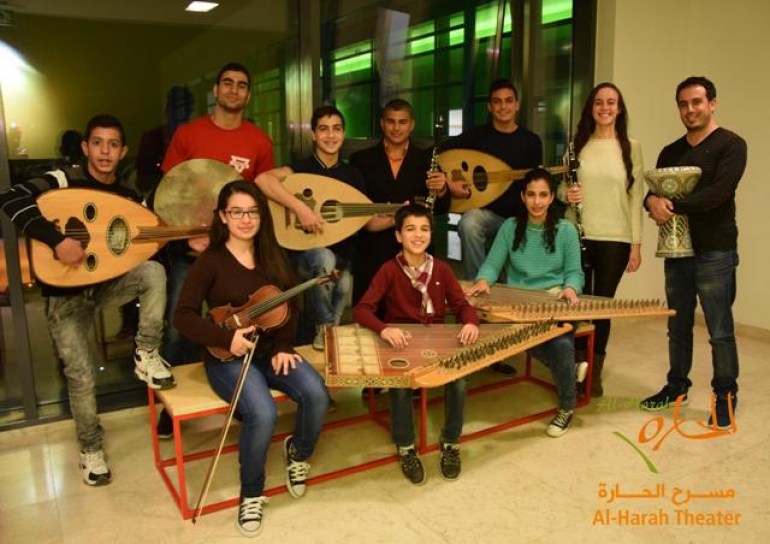 Al-Harah Theater is hosting a "Music Show" for Jilan Music Group from Edward Said National Conservatory for Music - Palestine within The International Children and Youth Theater Festival "Yalla Yalla" 2017, on Monday 10/4/2017 at 6:30 pm at The Russian Center - Bethlehem.

The show is suitable for all ages.

Jilan Music Group was established in 2011. The group includes some of the best students of the Edward Said National Conservatory of Music - Bethlehem Branch. The group was called “Jilan” because it connects two generations of music together; the old music with the new musicians. The group’s idea is based on focusing on the Palestinian heritage in particular and the Classical Arabic music in general through using traditional Arabic music instruments like the Nai, the ‘Oud, the Zither and the Tableh (Drum) and the music distribution which creates a music dialogue between the instruments. This mixture creates a cohesion between the old Arabic music and modernism. The group consists of eight musicians led by Maestro Tamer Al-Sahouri.

in cultural infrastructure in Palestine.

The Edward Said National Conservatory of Music is built around an ambitious vision of having a lively and creative musical culture in every Palestinian home. To that end, it works in three broad areas.

First and foremost, ESNCM works in Education. Over a thousand students currently study music on the Academic Programs in the ESNCM’s five branches in Jerusalem, Nablus, Gaza, Ramallah and Bethlehem. The second essential element in realizing the ESNCM’s vision is building audiences. Thirdly, the ESNCM is proud to be part of investing

Read 7652 times
Tweet
More in this category: « “Za’rour’s Garden and the Apple Tree” Play "As the Sun Fell" Play in Jerusalem »